A downloadable game for Windows

At the height of the industrial steam revolution, a young woman's death has sparked intrigue in a small, derelict city district. Edwin Vayne, a once prominent young detective, has been called into these inner city slums by a mysterious, yet very personal letter to investigate. Follow Edwin as he unravels a mystery that runs deeper than he might have known, and help him to make decisions that will alter the course of the story for better or for worse. Will Edwin prove himself up to the task, or will this particular mystery elude even him?

Unzip the folder and make sure to keep the www folder next to the .exe.
If not you'll be unable to save/load your game.

I love this game. I do wish it was longer.

Beautiful game. I love how different choices changes some dialogue, but there's not really a difference besides the outcome of who gets to say what.

The extra residential section seems unnecessary. I can only assume it's there to establish the steampunk vibes and the detail is astounding. It did however throw me off my first play through when I had to find the victim's apartment because (1) that section wasn't closed off even though the train section was and (2) it was the first place I checked since it easily matched the description of a place where the victim would live as well as how they died. In short, I did not except a tiny one-story looking balcony to be the scene of the crime. I still wouldn't shun the beautiful graphics for that section since it did help establish the game's universe, but did not by any means involve the actual story.

Same thing could apply for the train station I suppose. A cut scene would have sufficed since the actual area had no use (other than that odd bit with the mouse).

If the purpose of having all that walking space was for players to get immersed in that world, there would have been other ways to do that without creating those unused areas. If detail was what you were going for, mannerisms, local slang, and even terminology to name a few would equally captivate players. After all, you did say this was "a story focused game", and dialogue is a really important aspect of stories which would have been incorporated anyways.

By absolutely no means am I trying to discourage all of the hardworking people that made this game, because the game is fabulous! I'm just hoping some constructive criticism and suggestions would help improve games like this because if quality and effort like what I just saw got fine tuned, it could make games that were good, become far greater.

Interesting story with amazing characters. Loved this game a lot! <3

A short, fun game with a very well knitted story! The music is delightful and the way the story is painted beautifully in front of you as you play the game. I'm in love with the cosy sad town and it's good people. I hope that there will be more games in the same world.

I finished the game an with all honesty I liked it,
and even recommend it to everybody who reads this.

It was short yet fun, and a great storyline, and custom art.

But I do wish, that you could enter more buildings, but that's just me personally.

Why is the title reminding me of another game.. OH! Hello Lazy! If you created this game with an RPG/RTP engine(I expect you to), please make an version without it! So if you do we'll just have to download the an engine! Like RPG VX ACE! I'm sorry if this is like, calling you dumb.. But please make it if you can!

Well I loved this! Charming characters, lovely backgrounds and an intriguingly whimsical story. Really looking forward to getting to the end of it, and I've voted for this game in the jam too!

Keep up the great work everyone!

Will this game be available for Apple anytime soon?

Sadly we currently lack the possibility to deploy a mac version.
But we'll keep it in mind! Sorry.

Forever hitting my enter key to move the story on, just got tiresome. Definitely talented people but this game is not for me

We're sorry.
The limited time of the gamejam kinda got us at the end and we had to scratch a few gameplay elements we would have loved to include.
But we'll learn from it and improve in the future! :)

A big thank you, because you still took the time to leave a comment!

Wow this is looks awesome!

It's crazy how much of an impact a game this short can have. I'm sitting here wishing I could play more of it. Awesome job, everyone!

Thank you sooo much!

We hope we can deliver and bring you either a remastered version with a bit new content or an all new second installment ;)

Very fun game! I was terribly disappointed when it ended ;P you all did wonderfully! I've only played through once so I'm a bit curious about  how the ending changes based on your choices  (The only scenes where I saw alternatives didn't in my opinion seem very important to the overall plot) which I suppose just means I'll have to play through again huh? :)

I don't want to spoil anything for those who haven't played through (Which you should hurry up and do right about now ;) so I won't say too much about the ending I saw but I ASSUME it was a "Good" ending (I mean I didn't die and we ) I'd be very interested to see more games starring (or featuring, I'm not picky) Edwin Vayne.

Oh! Before I end my , er, review, I wanted to say I really enjoyed the art style, the town was rather fun to explore! (Though I wish I got to beat up some more thugs ;P)

*Puts a note to the checklist* More thugs to beat up. ;)
We'll keep that in mind for a remastered version or a second game.

Thank you very much for the review! We're happy you enjoyed Dear Edwin.

WOW! This game is phenomenal. I haven't made it all the way through but my wife and son are playing also. They were both very excited to see a detective/investigation game. Great work, team!

Thank you very much!

If you can think of anything that you'd love to see improved feel free to let us know, because we're currently planning to polish it a bit more or make a second installment, that has all the elements in it that we had to leave to due to being short on time. :)

Hi. My name is Mel. I was wondering if I could translate your game into Spanish. If it doesn't bother you, of course.

Thank you.
But we prefer to keep only the english version for now. If we ever plan to translate it, we would most likely hire someone. 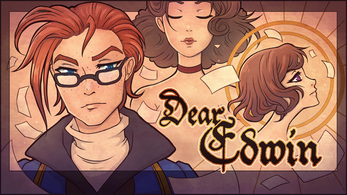 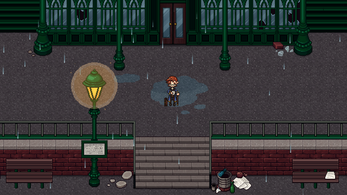 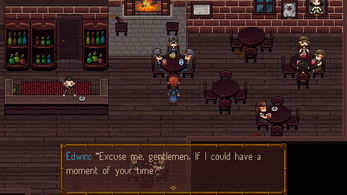 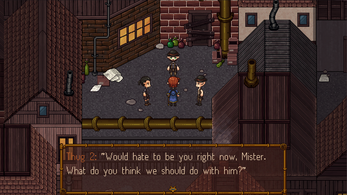